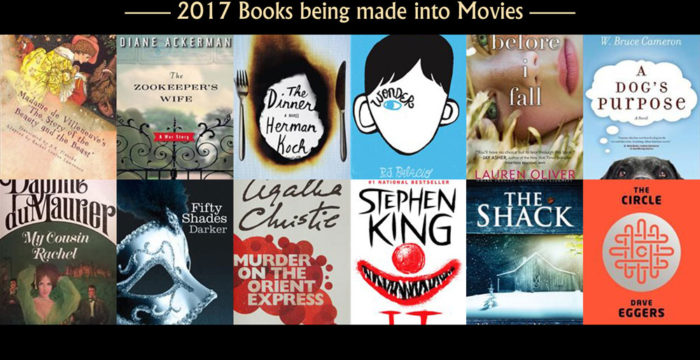 The book was so much better! Every avid reader knows, that the book is always better than the movie, but that does not stop many of us from rushing to the theaters. One often wonders whether Hollywood has stopped writing original content and is relying on the paperback biggies to come up with interesting material. On the other hand, compressing eight chunky volumes of an epic fantasy book series that most people would not read in the first place to a cinematic experience is also no easy feat. 2017 brings with it a slew of highly anticipated book-to-film adaptations that are set to hit the Cinemas. With the cinemas running houseful, hugely popular movies like the Harry Potter franchise, the Hunger Games trilogy, Fifty Shades of Grey and others show us just how successful film adaptations of books can be. From Stephen King to Agatha Christie, a host of great authors will their work being adapted for film this year. If you can’t decide on what to watch, get ready by adding these 12 books to your reading list before they hit the cinemas!

What it’s about: Every dog happens for a reason. “A Dog’s Purpose,” which spent 52 weeks on the NY Times bestseller list is written by humorist W. Bruce Cameron. Directed by the famous Lasse Hallström, the premise is about how a dog seeks to find his purpose in life over the course of several lifetimes and owners. Given the director’s previous work with Hachi: A Dog’s Tale, this one is sure to be a Kleenex-grabber.
Who’s starring: Dennis Quaid, Josh Gad, Britt Robertson and whole bunch of furry friends.
Release date: January 27, 2017

What it’s about: Anastasia Steele and Christian Grey return in this sequel to rekindle their passionate and mysterious love story. In E.L. James’ second book in the Fifty Shades of Grey franchise, where a wounded Christian Grey tries to woo the ever cautious Ana Steele to come back into his life. While he meets her demands of a ‘normal’ relationship, ghosts of his past circle the couple determined to destroy any hopes of a happily ever after.
Who’s starring: Dakota Johnson, Jamie Dornan, Kim Basinger, Hugh Dancy, Marcia Gay Harden, Jennifer Ehle.
Release date: February 10, 2017

Before I Fall by Lauren Oliver

What it’s about: This coming of age novel by Lauren Oliver, tells the story of a popular high-schooler who is killed in a car crash, but is forced to relive the fatal day seven times in an attempt to try and change the outcome. As it goes with most YA (Young Adult) stories, she learns important lessons about herself, her behavior and the people around her in the process.
Who’s starring: Zoey Deutch, Halston Sage, Logan Miller
Release date: March 3, 2017

The Shack by William P. Young

What it’s about: This runaway bestseller, written by Canadian author William P. Young is about a grieving father who meets God at the site of his loss. The Shack tells the tragic story of a man who suffers a family tragedy on a camping trip. Engulfed in his depression he received a mysterious letter and returns to the site a few years later, where his beliefs are put to the ultimate test.
Who’s starring: Sam Worthington, Octavia Spencer, Radha Mitchell
Release date: March 3, 2017

Beauty and the Beast by Gabrielle-Suzanne Barbot de Villeneuve

What it’s about: The long awaited live-action remake of the book hits cinemas this year. Directed by Bill Condon, this classic love story tells the tale of a woman who is taken hostage by a beast – only to fall in love with him later. Talking tea cups and a heartfelt soundtrack lend to the drama written by Gabrielle-Suzanne Barbot de Villeneuve.
Who’s starring: Emma Watson, Dan Stevens, Luke Evans, Kevin Kline, Josh Gad, Emma Thompson, Stanley Tucci
Release date: March 17, 2017

The ZooKeeper’s Wife by Diane Ackerman

What it’s about: This non-fiction work by Diane Ackerman tells the riveting story of Jan Zabinski and his wife Antonia, keepers of the Warsaw Zoo in Poland; and how they saved hundreds of Jews from the Nazis during WWII by hiding them in empty animal cages. The film is directed by Niki Caro and based on Antonia Zabinski’s diaries.
Who’s starring: Jessica Chastain, Daniel Brühl.
Release date: March 31, 2017

What it’s about: August Pullman was born with a facial deformity that previously prevented him from going to school. Now he is starting 5th grade at a prep school, he just wants to be treated as an ordinary child, but his classmates can’t get past his unusual face. Written by Raquel Jaramillo, under the pen name of R.J.Palacio, and directed by Stephen Chbosky, little Auggie strives to show everyone that beauty is not just on the outside.
Who’s starring: Julia Roberts, Owen Wilson, Jacob Tremblay
Release date: April 7, 2017

The Circle by Dave Eggers

What it’s about: Dave Eggers’ sci-fi original about a young woman who takes on a job at a powerful internet surveillance society. The story addresses the notion of privacy in a world where everything we do/are is put online.
Who’s starring: Emma Watson, Tom Hanks, John Boyega.
Release date: April 28, 2017

The Dinner by Herman Koch

What it’s about: How far are we willing to go to protect your children? Herman Koch’s intense novel about the dark, desperate side of civilized, middle-class society forms this thriller. As two couples dine at a swanky restaurant, their polite banter cloaks the fact that they are struggling with some grim family matters.
Who’s starring: Richard Gere, Laura Linney, Steve Coogan, Rebecca Hall.
Release date: May 5, 2017

What it’s about: Directed by Roger Michell, this is a drama/romance about a young Englishman who plots revenge against his mysterious, beautiful cousin, believing that she murdered his guardian. Things get complicated in this 1951 classic where he soon finds himself falling under the spell of her enigmatic allure.
Who’s starring: Rachel Weisz, Sam Claflin
Release date: July 14, 2017

IT by Stephen King

What it’s about: ‘They float, Georgie, and when you’re down here with me, you’ll float, too.’ This unforgettable, spine-chilling dialogue is etched in the memory of anyone who has come across Stephen King’s IT. The story of seven children terrorized by the eponymous being, appearing in the form of a clown in order to attract its preferred prey – young children. This 2017 remake’s first look promises terrorize us for the next 20 years.
Who’s starring: Bill Skarsgård, Jaeden Lieberher, Nicholas Hamilton, Finn Wolfhard.
Release date: September 8, 2017

Murder on the Orient Express by Agatha Christie